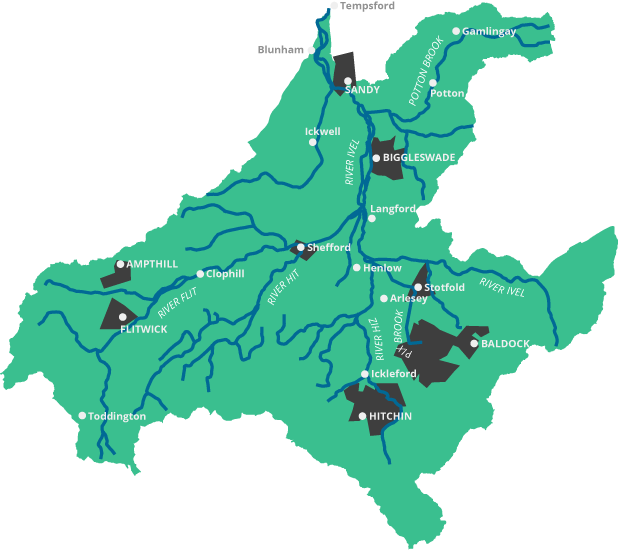 Some information about the Ivel embankments and weirs project.
left
1
#ffffff

Planting of 0.5 ha copse of native wet-woodland species beside a tributary of the Ivel in corner of field too wet to be cropped. Planting to be undertaken by volunteers with funding secured for the Biggleswade Green Wheel.
left
1
#ffffff

The eroding path is being repaired and the banks strengthened to prevent future erosion.
left
1
#ffffff

Creating attractive riverside habitat and providing benches and an open path network for people walking along the river.
right
1
#ffffff

Creating attractive riverside habitat and providing benches and an open path network for people walking along the river.
left
1
#ffffff

Investigating feasibility of water level management to enhance and create further wet woodland, reedbed and water meadow habitats. This may be done through manipulation of ditches in particular, to retain more water on site. (Note: not Flit - too nutrient rich).
left
1
#ffffff

Building and otter holt and a kingfisher bank.
left
1
#ffffff

About the Ivel catchment

The River Ivel catchment is bounded by the Chiltern Hills to the south and Greensand Ridge to the North. The Rivers Ivel and Flit, and some tributaries, rise from springs in the Chiltern chalk. Several smaller watercourses (Running Waters, Chicksands Brook and Millbridge Common Brooks) rise from the Woburn Sands aquifer. The River Ivel headwaters are dominated by Hitchin, Letchworth and Baldock. Further along the rivers are Ampthill, Biggleswade and Sandy. Elsewhere the catchment is mainly rural with agriculture and horticulture. The catchment is noted for its angling interest, water vole and otter populations and important wetland habitats.

The Environment Agency has been surveying and monitoring water quality in the Ivel catchment against WFD criteria since 2009. Details of the findings can be found from page 27 in the Upper & Bedford Ouse Management Catchment – Catchment Summary.

In both 2009 and 2013, approx. 33% of water bodies in the Ivel were classified as being of Good status. However, in 2013, there were fewer Moderate and more Poor water bodies. There is clearly much work for the Upper & Bedford Ouse Catchment Partnership to do – both as a partnership and through its constituent members – particularly those with statutory responsibilities, such as the Environment Agency and Anglian Water.

Investigations by the Environment Agency since 2009 indicate that the top 3 reasons for more water bodies in the Ivel operational catchment not achieving ‘Good’ status are:

The Upper & Bedford Ouse Catchment Partnership together with local groups, land owners and interested parties are working to identify projects and activities which can address these issues, to maximise the number of Good water bodies within the Ivel operational catchment.

Please navigate around the Ivel operational catchment map to see current, planned and completed projects. More projects will be added in the coming months and years.