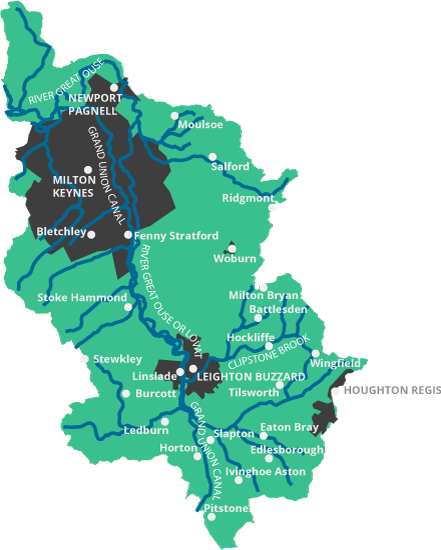 We would like to involve you in the future care of the Riverside Walk. This might be through practical involvement, monitoring or just keeping you updated.

Find out more about the project.
left
1
#ffffff

About the Ouzel & Milton Keynes catchment

The River Ouzel (also known as the Lovat) rises from chalk springs in the Chilterns. It flows northwards, through Leighton-Linslade, cutting a gap through the wooded sandstone hills of the Greensand Ridge before passing through the east side of Milton Keynes and joining the River Great Ouse at Newport Pagnell. The Clipstone and Broughton Brooks are two of its main tributaries.

This catchment includes a the Loughton Brook (draining west Milton Keynes), Tathall Brook and a section of the River Great Ouse (Wolverton to Newport Pagnell) where the valley delineates the northern boundary of the designated new town of Milton Keynes. . The Grand Union Canal runs north-south along the River Ouzel valley.

The major urban area of Milton Keynes dominates the north of the catchment, where the River Ouzel has been significantly modified by flood management schemes, including the two large balancing lakes at Caldecotte and Willen. There are linear parks along the main watercourses and floodplains and these are a defining feature of the city.

Leighton-Linslade is the main settlement in the south and the Ouzel’s floodplain provides a major area of accessible open space stretching through the centre of the built up area. The rest of the catchment is mainly rural with mixed agriculture including extensive floodplain grazing, and the river remains relatively small and intimate with meanders, riffles and pools.

One theory for the origin of the name ‘Ouzel’ is a historical association with the dipper, a thrush-sized bird now largely associated with upland rivers and streams, but which is featured on the town crest of Leighton-Linslade. Kingfishers can be seen along the river, which brings nature close to many people through the two main settlements. Records of otter are increasing along both the Ouzel and Great Ouse in Milton Keynes, and ancient willow pollards and rare black poplars are an important feature of the Ouzel’s cultural and physical landscape.

Investigations by the Environment Agency since 2009 indicate that the top 3 reasons for more water bodies in the Ouzel and Milton Keynes operational catchment not achieving good status are:

Through local consultation and engagement issues such as Invasive Non-Native Species (in particular Himalayan Balsam and signal crayfish), litter and fly-tipping and low flows have also been raised.

The Upper & Bedford Ouse Catchment Partnership together with local groups, land owners and interested parties are working to identify projects and activities which can address these issues, to maximise the number of good water bodies within the Ouzel and Milton Keynes Operational Catchment.

Please navigate around the Ouzel and Milton Keynes operational catchment map to see current, planned and completed projects. More projects will be added as they arise.