This project was to restore an old river feature and create some bank protection on the river Great Ouse at Harrold Odell Country Park. The project was carried out in partnership between Wildlife Trust BCN, Environment Agency, and Bedford Borough Council. 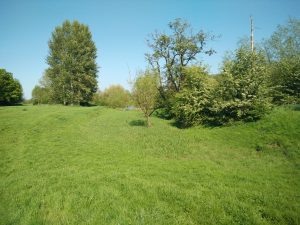 The principle aim of the project is to excavate an old back-water that has silted up and re-profile a heavily poached bank then installing a cattle ramp.

The first part of the project was the excavation of the back-water. The back-water, a river feature that was present on maps of Harrold Odell Country Park area in 1900s, had become silted up over time and formed a wet/dry pond.

The restoration of this area will provide a refuge area for fish and fry in flood events. It will do so by providing an area of slow or no flowing water that fish and fry can take refuge and not be washed downstream. As a feature that is connected permanently to the river it will also provide extra variation in available spawning habitat for fish in the river.

A large amount of sediment was expected to be excavated from the back channel, over 1000m3. When planning what to do with all this sediment it was decided that rather than just spread the material around the site we could maximise habitat creation from the project by creating a number of butterfly banks, essentially raised banks and mounds of earth which will be managed for the benefit of invertebrates. 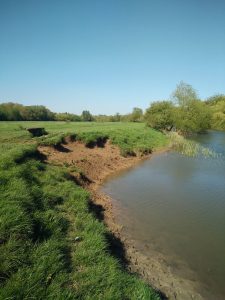 The second part of the project involved re-profiling of a river bank further downstream that had been heavily poached by cattle and then installing a cattle ramp. Soil poaching is the churning up and exposure of soil due to wet ground being over trodden by cattle hooves. The river bank at this point has had some considerable erosion by poached soil and repairing the bank is necessary to help prevent excessive amounts of sediment being washed into the river in flood events. This sediment was contributing to the reduction in the amount of fish spawning by smothering the gravel habitat used to lay eggs. Creation of a cattle ramp will formalise access to the river for drinking whilst protecting the bank from further poaching and sediment erosion. 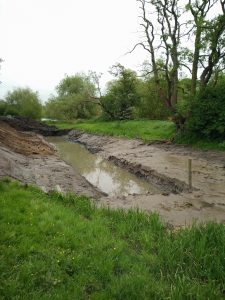 The project was tendered in February with consent obtained from the EA to comply with deposition of sediment within the floodplain. Work on the project was planned to start in March 2018 but in fact didn’t get under way until May due to the persistent rain from February!

The site unfortunately looked a little messy due to the nature of the work, recovery of which was hampered by the summer drought. However it is hoped that by spring 2019 the vegetation will quickly re-establish and it will look as though the features have always been there.

Post-project the features will be monitored by the river warden that surveys the stretch of river by fixed point photography to document changes over time and also the Bedford Borough Rangers of Harrold Odell Country Park will be monitoring water levels in the area. 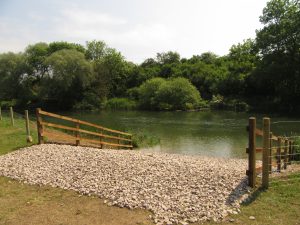 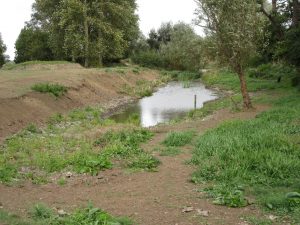